The upside of downsizing 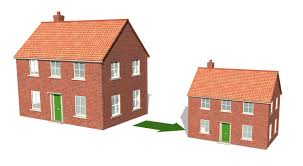 Hey, downsizer - the only thing you have to fear is fear itself.

Chances are, if you're reading this, you've at least thought about it. Most boomers do at some point, and a lot of us follow through on it.

The Conference Board of Canada has predicted more than 80 per cent of new housing demand will come from those over 65 in the next 20 years.

Those number geeks also say 60 per cent of new households will be formed by those 75 and up.

That's a lot of tears and moving boxes, people.

My wife and I missed the Freedom 55 moment two years ago, but after a dizzying flurry of real estate transactions, basement purging and a jump off some emotional and financial cliffs, we're living the next best thing: the downsizer dream. The following advice is worth what you've paid.

DON'T THINK IT THROUGH

Carefully researching neighbourhoods, analyzing the market, selling before you buy - you'll never do it.

The very thought of dealing with all your stuff is enough to make you open another bottle of wine and watch Hoarders instead. See, those people are much worse than you. Besides, you love your house.

Our household was split along pretty familiar gender lines for ages. I regularly issued orders that we were moving downtown to end my three-hour daily commute and painful war with the flora and fauna in our yard. My wife, meanwhile, continued to transform said yard into a garden paradise and nurture our social connections in a beautiful beach neighbourhood.

It all came to a crashing halt after 18 years when my wife did the unthinkable: she called my bluff and fell in love with a 686-square-foot apartment on Stanley Park. The loss of a beloved family pet really started it all (a familiar story, it turns out), but before I could get out the words "uh, maybe we should think about this," the apartment was purchased and the house had to go.

Fasten your seat belts; it's time to sell the house.

FIRST RULE - DO NOT TAKE IT PERSONALLY

After almost 20 years at the same address in a community we loved and a house that we had gutted once and renovated almost constantly, we were thrust into a harsh new world of real estate bargaining - and a closing date on the apartment loomed.

We soon learned it's a jungle out there, and the market was on the verge of softening.

The process was brutal, as personal items and artwork were appraised and became part of the purchase-offer battleground.

Just to make it a little more interesting, one of our best friends became our realtor. The result? Sold in eight days, and we had to be out in three weeks.

Needless to say, we're all still the best of buddies.

NOW COMES THE HARD PART. YOU HAVE TO GET RID OF YOUR STUFF

Chances are, one spouse will do more of that work than the other. And that there could be some temptation on the other's part to critique that work.

That could lead to different interpretations of what is "good stuff" and what is not. Tread softly, and for the love of Santa, do not ask if the family really needs four boxes of Christmas stuff (when the count has already been whittled in half.)

"Good stuff," when it came to classified ads and garage sales, turned out in our case to be the kitsch and mid-century modern. Beautiful heirloom furniture from mom and dad? No thanks, but I'll take that cool Coke sign or funky night light. If it was big, and made robustly out of wood to last the ages, nobody wanted it. That included a heritage baby grand piano. But if it was in any way featured on TV in the '60s or '70s, it was gone.

We dreaded dealing with the almost 40 years worth of photo albums, but my wife dealt a master stroke. Photos were ripped from the pages and compiled according to the faces in the snapshot. Each family member and old friend then received a package of nostalgia to do with what he or she saw fit.

After the giveaways to family members and friends, the sales to those who responded to ads and the parade of antique dealers who toured the house, it was time to face the music.

If there's anything worse than waking up at 6 a.m. with a massive hangover, it's waking up at that ungodly hour to put on a garage sale. In the rain. At least you get to see who your real friends are.

After the soggy but successful garage sale (due entirely to the efforts of my wife and our friend/realtor), and a subsequent visit by the thrift-store truck, the rest went into landfill.

Probably the only really sad part of the whole thing.

Did I mention the apartment hadn't been updated in 40 years and was to undergo a complete renovation? Hello hotel room for 10 weeks. One offshoot of this encampment was an unhealthy attraction we acquired to the "reality" TV show Storage Wars. It could have been due to the downtime we suddenly had, or by the fact that we had to rent one of those lockers (10 by 20 ... nice unit) to hold the 21 boxes and other "good stuff" until the apartment was livable. Every night, I was visited by a nightmare that featured a diamond saw cutting the lock off our locker to the "oohs" of a frenzied group of bargain hunters with eyes all over my guitar cases and amps.

Going multi-family after 30 years of house living comes with a whole new set of rules governing elevator use, noise levels and parking/bike storage space. Even though there's less of almost everything, it seems to take longer to get anything done. And you can forget about taking shortcuts. Even though excellent movers handled the job, the whole process left us exhausted ... and the torn shoulder muscles have yet to heal.

Can't say we've really found a downside. We do miss friends from the old hood, but great neighbours and merchants are certainly found in our new stomping grounds.

The beloved garden has been traded for a small balcony space, the baby grand piano for an upright. Friends and relatives from afar still visit us, they just overnight in funky nearby hotels instead of the spare bedroom we no longer have.

The biggest plus is probably an end to reliance on the car. Walking to work, shopping, concerts, sports events and pretty much anything else keeps us healthier and happier - not to mention making everything much more affordable. As near gridlock approaches on the rush hour and with transit funding, it's hard not to feel smug about being part of the solution after years of causing the problem.

This kind of radical downsizing may not be for everyone - those who want space for visiting children and grandchildren come to mind - but we've found it completely liberating. (After the reno was completed, we were surprised with how the apartment resembles an upscale version of the one we moved into after we got married.)

A fresh start is fun - the hardest part is taking the first step out the door!