With summer in full swing and outdoor dining and barbeque cuisine being enjoyed by many, here are a few wine hints and pairing suggestions to try on your deck with good friends and great food:

When shopping for wines for outdoor summer events, choose wines that were grown in hot climates. The wines from hot climates are generally more forgiving in hot, outdoor temperatures so they don’t spoil as fast in the sun. Many of these wines also have flavours that pair naturally with grilled dishes.

Our mission is to transform private vacant lots into temporary community gardens through mobile garden beds.

Shifting Growth offers a turnkey project management service for landowners.  Our professional services are built upon our ability to co-ordinate and manage all required activities to transform a private under-utilized lot into a public growing space.

Our intention is to demonstrate the temporary establishment and management of community gardens on vacant lands will provide benefits to both the landowners and local communities.  Once the land is ready for alternative purposes (such as development, sale, or further remediation), Shifting Growth`s temporary garden infrastructure can be easily moved to another site, preferably within the same community. 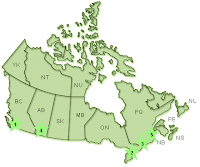 According to a 2011 index sponsored by Siemens, Vancouver is the greenest city in Canada and Montreal is the least green. The index measured and rated the environmental performance of 27 cities in the US and Canada in nine categories: CO2, energy, land use, buildings, transport, water, waste, air and environmental governance. The index was a project run by the Economist Intelligence Unit, an in-house research unit of the British magazine The Economist. Cities were selected independently rather than through requests from city governments to be included. A panel of global experts in urban environmental sustainability advised the unit in developing methodology for the index.
Vancouver was second overall and first in Canada. Vancouver landed in the top 10 in each of the nine individual categories, ranking first among all cities with the lowest carbon dioxide emissions and best air quality.

Toronto placed ninth overall and second in Canada. The city earned a fourth-place ranking overall in the waste category, the city has a 44 per cent recycling rate which is well above the 26 per cent average. Other waste related initiatives for the city include composting, waste separation and volume-based trash payment, and a public awareness campaign.

Ottawa was twelfth overall and third in Canada. The national capital ranked third in land use and the city boasts the highest percentage of green space in the index.

Calgary was fourteenth overall and fourth in Canada. Calgary was the best on the list in the water category. The city consumes 428 liters of water per person per day compared to the index average of 587. Calgary was also noted for its waste water management.

Montreal was nineteenth overall and last amongst Canada's major cities. Although the city took the fourth overall spot in the transport category with its public transit system deemed one of the best. The report indicated that Montreal has second highest share of non-automobile commuters. Some 29 per cent of workers commute by public transit, bicycle, or on foot — more than double the index average. Montreal scores well in transportation due in part to its cycling infrastructure. Montreal also has low per-capita carbon dioxide emissions due to its reliance on hydro power. However, the city is weak in green building and environmental certification. Montreal has among the fewest per-capita LEED (Leadership in Energy and Environmental Design)-certified green buildings in the index; we use more energy per capita than the index average; and the carbon and energy efficiency of our local economy is abysmal. For every dollar of local gross domestic product, Montreal uses almost three times more energy than the index average.

July 7th is the big day! We will be creating a community garden in partnership with Shifting Growth. We invite the community out to get involved in a variety of ways

1. Reserve a plot today and have your very own space in the community garden
2. Enjoy live music and conversations
3. Bring out the family and make garden art, painting decorations for the garden
4. Take some photos or video for us to share on facebook, twitter and youtube
5. Have some refreshments with us
6. Become a local business partner, provide food, beverage and entertainment
7. Meet our shy yet lovely Leslie the Ladybug as he makes his first garden appearance of the summer! Take pictures and pain ladybug rocks with Leslie!

Our main goal is to create a sustainable food source, include members of the community, build gardens and give back a portion of the food to those who are in need.

Can You Dig It is a non-profit organization working toward the betterment of the community, if you would like more information on sponsoring aspects of the garden please contact us at info@cydi.ca